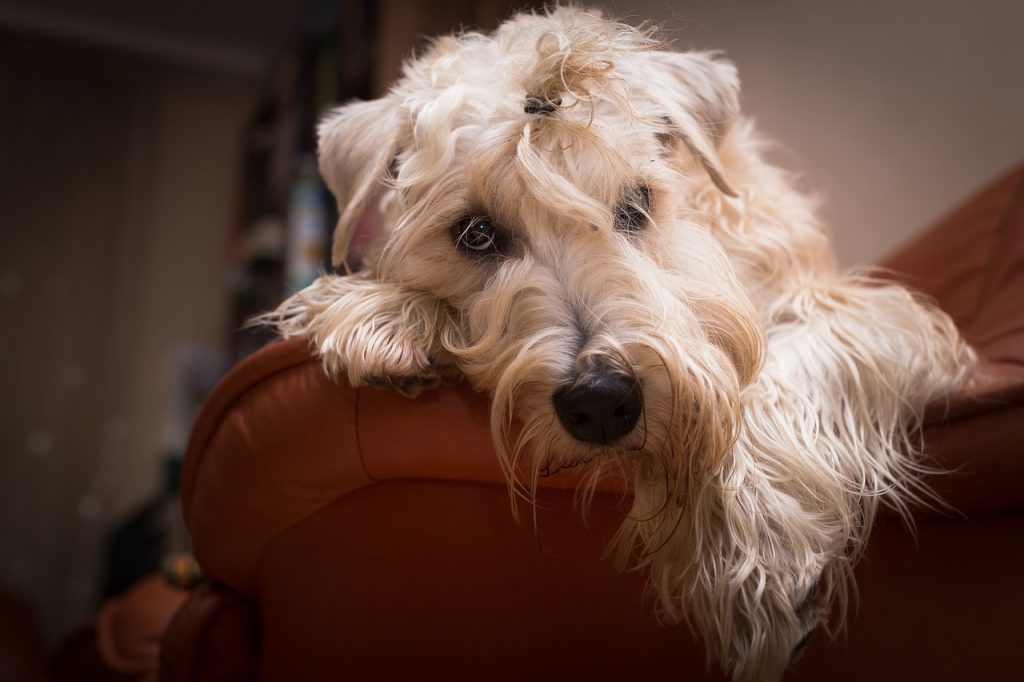 Housebreaking is one of the most intimidating parts of adopting a new puppy. Potty training a puppy in a high rise apartment can be an even bigger logistical nightmare. Accidents can occur not just in the apartment, but in the hallway, the elevator, and all the way through the lobby.

Raising a puppy in an apartment is a lifelong commitment. The first thing to do is decide on how you want to housetrain. Some dog owners in apartments opt not to take the dog outside at all, and others do. Each approach offers something to consider.

For some parents of a new puppy, especially of small breeds, the thought of taking their baby out into the busy city is simply too stressful. City etiquette usually dictates that you teach your dog to urinate in the gutter, but it can be frightening to have your little pup step down off the sidewalk.

Other owners believe that teaching your dog to potty outside just makes more sense. After all, it can be complicated to teach your dog that going inside doesn’t mean going anywhere inside.

You’ve decided that a strict indoor plan is for you. First things first, set up a “puppy area” for your dog to play. A new puppy doesn’t need unlimited freedom to wander your whole place, and it just makes it harder to keep a watchful eye on them. Puppy playpens, or even just baby gates, will contain your furry bundle of joy for the early stages.

Puppies piddling on newspapers is so common it’s almost a stereotype. Simply line the bottom of the play area with a few layers of old newspaper.

At first, the puppy will just stop and go anywhere. After a few days remove the newspapers closest to puppy’s food and water bowls. Dogs have an instinct not to soil their food or water source, so they’ll naturally gravitate away from there. A couple of days later reduce the papers a little more. Always be traveling further away from the eating area.

By the time this method is complete, there should only be a small section of the puppy zone left papered. Over time your dog will become accustomed to going there and will be reluctant to toilet anywhere else.

Remember to change the papers often. A newspaper isn’t very durable by nature, so you will need to change the soiled sections after every potty break. Leaving a mess will set your dog’s progress back.

A very similar method to paper training is using puppy pads. This technique works exactly the same by gradually reducing the number of pads laid down. Many pet parents prefer pads, though, because they are more absorbent. Some brands of pads also have scents in the fibers that will naturally draw your dog’s attention, making it easier for them to learn.

I know what you’re thinking. A litter box? For a dog? Well, it’s not as weird as it sounds. Puppy boxes have a top layer of synthetic grass and a bottom layer of litter. After your pup does their business just rinse off the grass and change the litter.

You can even make your own puppy box. A roll of sod and a plastic litter box will do the same job as a fancy storebought unit.

These are both great strategies for those who might want to transition to an outdoor plan at a later stage. If your dog is already used to pottying on grass then going outside will be much easier.

You’ve decided that dogs don’t go in the house, and are prepared for the trek down the high rise. Here are some things to consider.

Waiting for your pup to start whining and scratching may not give you enough time. You have to get your dog out of your apartment, down the hall, wait for the elevator, and then get them safely outside with no issues. Easier said than done.

Young pups should be going outside constantly. Plan for at least every hour, but be prepared for more often if your fur baby has an especially small bladder. Puppies should be carried out at first. It’s just faster and more practice until you can trust them to walk all the way outside without incident when they’re a little older.

Ivan Pavlov famously trained dogs to the sound of ringing bells. You don’t have to be a world-renowned physiologist to utilize a similar method. Teaching your pup to ring a bell when they need to go out can be helpful when you can’t constantly keep eyes on them.

First, introduce your dog to the bell. Choose a command word. You might have to use a favorite treat (like peanut butter) on the bell itself until your dog is comfortable.

When it’s time for your scheduled potty run, employ the command word until the dog rings the bell. It’s important to associate the bell only with potty time. If you take them out and they don’t do their thing after a few minutes, immediately come back inside with no praise.

One word of caution about this method. Your dog will ring the bell every time they need to go out. Every time. Even in the middle of the night.

Bag it, don’t leave it

Part of being a responsible puppy parent is cleaning up after them. If you’re going to be potty training outdoors, be aware of your locality’s ordinances. Leaving a mess behind isn’t just rude, in some places it’s actually illegal. Always bring proper doggy bags, gloves, towels, and anything else you’ll need to leave no traces behind.

Now that you know your options a little more, let’s get into how it actually works.

Success depends on YOU

The most important thing to remember is that your dog is a dog. They won’t know how to do anything until you teach it to them. Any training plan will require consistency, repetition, and positive reinforcement.

The only way to learn is by doing, but that means doing things right. When you start training, make sure you’re always doing things the same way. If you have multiple exits from your apartment only choose one, and always use that one. Taking the stairs instead of waiting for the elevator? Always take the stairs.

Did you box train your dog instead? Then the box needs to be the same kind, in the same place every day. Whatever it is you choose to do, do it how you always do it. Keeping things as streamlined as possible will make everything easier for you and your pup.

Create a schedule for feeding and training. A dog only needs a few minutes after eating until they’re ready to go. Keep that in mind. Having an hourly potty break timer is great, but the system will break down if you don’t take mealtimes into account.

Some little guys have trouble holding it overnight. Crate training a puppy in an apartment is one way to avoid waking up to a war zone. (The Pampered Pup provides reviews and guidelines on choosing the right crate)

We’ve already mentioned how dogs are averse to eliminating in the same space where they eat. The same goes for where they sleep. Containing them in a smaller area than their play zone overnight can help them learn to hold it. Just make sure the crate is the right size. One that’s too big will give a small puppy plenty of space to make a mess in one half, and sleep in the other.

For the first few weeks of their life, a puppy will not be able to hold it overnight. Not even in a crate. Be sure to manage expectations accordingly.

Dogs learn better when they’re having fun, just like people do. Make potty time a celebration. Reward your dog for performing with plenty of pats and kind words. Once they associate the praise with potty time they will commit much better.

It can be helpful at first to keep a log of your pup’s behavior throughout the day. How do they respond to going out? Using the pad? Do they have an accident at the same time each day? Jot down any strange things you notice, how they react to the schedule, anything you can think of.

If something isn’t working it’s up to you to fix it. Having a handy sheet of data you can pull out can really help.

Now it’s time for something that might be controversial: punishment doesn’t work.

For all that we love our pets like children, they aren’t actually capable of complex human thought. A dog doesn’t know why you’re rubbing their nose in pee. All they know is you’re upset, and they’re afraid.

Smacking them with anything is the same. A negative link is formed in the dog’s mind between your tone and the punishment, and whatever you were trying to teach them is lost.

Reward the good, ignore the bad

Science tends to show us that creating positive associations in the pup’s mind works much better than anything else. Effusively praise the dog when they succeed, and simply withhold the praise when they fail. This will let them know they need to do something different without breeding fear or resentment.

Even the sweetest angel puppy will have accidents. What matters is ensuring they happen as infrequently as you can. A major factor in repeat offenders is odor. Dogs have a much more sensitive nose than humans, and they can smell urine even after a mess is cleaned up.

Using the proper cleaner is essential. Ammonia is a major component that gives dog pee its unmistakable odor. An ammonia-based cleaner might actually make the problem worse. Look for products that are specifically marketed for pet owners, and check the label. They should have special chemicals to break down the mess fully, leaving no scent markers behind.

What about adult dogs?

So far we’ve been mostly focused on puppies, but what if your new dog is more esteemed in years?

An hourly schedule is the best for older dogs at first, too, just like puppies. You should start completely over, from the basics. Get on a consistent schedule, and help your dog adhere to it.

Sadly, the main reason for grown dogs to lack potty training is because they’ve never had a family that cared enough to show them. They could be dogs from a mill, an abusive owner, or even rescued from the fights. These special cases will require even more love and patience than a puppy. Unlearning old behavior is much, much harder than learning something new.

An expert way to retrain an adult dog is referred to as the “umbilical cord” method. Basically, you attach a leash between yourself and your dog at all times.

There are some leashes designed for this that wrap around your waist, or you can tie a regular one to your belt loops. Just make sure you’re working with at least six feet in slack or you’ll both be constantly tripping over each other.

Being attached at the hip will give you a way to keep eyes on the dog at all times. They literally cannot get more than a few feet away from you. If you have to detach, either make a play space for your adult dog or use a crate. Then be sure to get back together as quickly as possible.

Regardless of the age of your puppy pal, apartment training a dog doesn’t have to be a nightmare. All training regimens take time and discipline–on your part. Be patient, be loving, and your pet will want to be the best they can for you. Make sure that you’re doing your best for them, too.